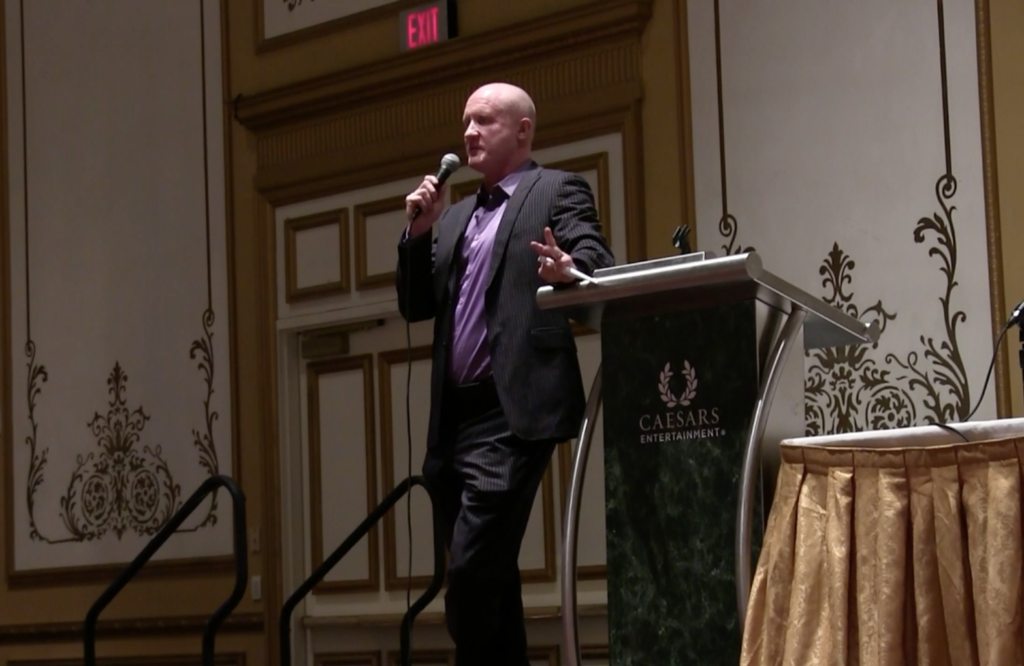 The Las Vegas Investment Club (LVIC) made its presence felt at FreedomFest 2017, winning over several new members and disseminating the LVIC brand in the process.

Mike Lathigee spoke twice at the four-day event, which marked the 10th anniversary of FreedomFest. He first spoke in the Main Ballroom at the Paris Resort on the morning of July 20 in front of more than 1,200 people. The speech touched on two of the capstone principles of the LVIC: Libertarianism and investor empowerment.

“Federal government should exist only to protect citizens from foreign invasion and help the absolute destitute,” Mike said when clarifying the definition of Libertarianism. “Whether you like [President] Trump or not, we’re at least moving back in the direction of Constitutional government with him in the White House.”

Lathigee made clear that Rand Paul was his pick for President, but Hillary Clinton would have continued the big government liberal politics that persisted throughout the Obama Administration. But the issues that neither Republicans nor Democrats ever sincerely address are the perpetual abuses investors endure at the hands of the financial services industry.

Mike used compounding as an example to demonstrate these abuses that the financial services industry continue to employ with impunity. Mike used the example of management fees over a long period. Through compounding, an investor loses more than half of his gains. This is not something the financial services industry willingly or otherwise discloses.

While Thursday’s speech served as a quick introduction to LVIC for FreedomFest attendees, the Friday afternoon session was more detailed and intimate. About 100 attendees gathered in Vendome B for a speech that amounted to a de-facto LVIC meeting for potential new members.

Mike told the crowd that he is bearish on the stock market right now due mostly to the unpredictability of President Trump. Whether he starts a trade war, starts bombing North Korea, or something else along those lines, it will directly and monumentally affect the stock market.

The Las Vegas Investment Club emphasises education and investor involvement. When members join LVIC, the first part of the process is a three-day intensive course. It covers, among other things, how to read and understand financial statements, how to evaluate companies versus their peers in the same sector, and of course sharing knowledge and experiences about the stock market, precious metals and other investments. Those who are completely new to investing first participate in a phone interview to ensure they fully understand the club and membership approval process.

“It’s one thing for me to just stand up here and talk about all these great idea,” Mike said as LVIC staff passed out financial statements and data pertaining to club investments. “What we have is a track record. What you’re looking at right now is the last eight deals we’ve done. This is not picking and choosing. [These are our last eight deals and] all of them are going well.”

Mike explained how a fitness club in California contacted LVIC. The company needed $2 million quickly to ensure operations continued as normal. It was netting $80,000 per month at the time in net income. LVIC loaned the money with two conditions: 1) that LVIC would have operational and financial control of the company and 2) the loan was secured via personal guarantee from the five partners involved in the company, while a charging order on the company bank accounts was also obtained. The loan has received timely payments for all 12 months, with APR exceeding 25%.

“To the financial advisors who will tell you this type of deal is impossible, we are a testament to the fact these types of deals do exist and they can happen,” Mike said. “We have approximately 80 of our members involved in that deal and all are very happy.”

The speech ended with 33 new investors signing up for LVIC membership, many of which were husband and wives. Married couples pay only one membership fee.

FreedomFest is a bootstrapped event that does not receive a lot of funding. One of the organizers happens to also be a member of LVIC and is a close friend of Mike. LVIC is committed to ensuring that this annual Libertarian gathering continues in perpetuity. That is why Mike personally donated two paintings that were auctioned off at the event. The painting ultimately sold for $13,200 and all proceeds were donated to FreedomFest.

The 10th Anniversary edition of FreedomFest was once again a great experience and LVIC looks forward to attending once again in 2018. The full video of Mike’s Vendome speech is below.

/ You may check this items as well

Hi and welcome to my personal website. This is a hub where you will find all of my past and current projects.

In this 300 page book Mike Lathigee gives a scathing overview of how the financial services industry bullies and misleads investors. It is a must read for any investor to be informed on what is really happening.